Once Upon a Bus 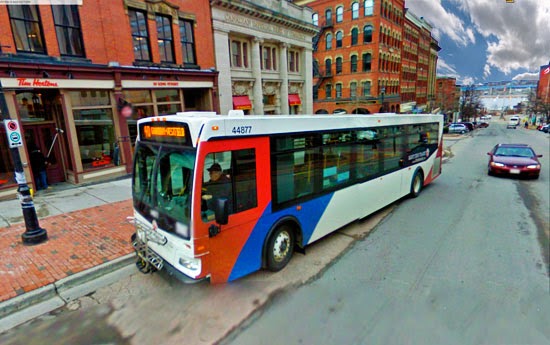 The oddest thing happened to me today, prompting me to dust the cobwebs from this blog and FINALLY write a new post. I'm not really sure what to make of it and, as I am wont to do in situations such as this one, I turned to the pen and page to sort out my thoughts.

Before I get to my story, there are a few background things to explain. First of all, I started taking the bus regularly this summer because, between work and summer courses, it seemed the easiest method of transportation. However, as someone who suffers with anxiety, city transit can be a pretty scary situation for me. After all, it involves being stuck in a relatively small space with a collection of strangers. Add to that the possibility of getting on the wrong bus or getting off at the wrong stop and *POOF* you get a panic-inducing shuttle straight to the hell of the darkest depths of your imagination.

Anyhow, today I was at King's Square waiting for bus #3 to take me to UNBSJ. No big deal. Or at least that was what I was trying to convince myself. I was most likely staring at the ground, willing myself to disappear. Then from what seemed like out of nowhere, I felt a hand on my arm. I looked up to see a girl around my age. She was wearing jeans and a faux-leather jacket. Her brown hair was held back in a ponytail and she had a purple book bag slung over one shoulder. I had never seen her before. My mind quickly turned to stranger-danger alert.

"Hey, do you know when the bus that goes to UNBSJ stops here?" she asked.

And lo and behold, the bus pulls up. The girl walked with me to the door, chattering about how convenient monthly bus passes are and did I have one? (I did.) We got on the bus. She went to the back while I balked at the sea of faces before me. I quickly sat down up front and tried to settle my anxiety-riddled brain for the ride ahead. As the bus started on its way, I heard someone sit down beside me. I looked up to see the girl again.

"Hey, I was thinking, we should get together for coffee sometime seeing as we both go to UNBSJ," she said.

Then she started telling me a bit about herself (her name was Meghan) and the courses she was taking at university, occasionally asking me some questions about myself. She liked to talk and seemed quite friendly. I was just glad for the distraction from the bus ride and found it easy to talk to her (unusual for me). The drive passed quickly and soon we parted ways on campus.

I didn't really expect to see her again, truth be told. It's not that I didn't want to - despite how I am generally nervous around others, I do genuinely like people - the frailty of humanity sates my constant need to be compassionate. But it was such a fleeting encounter and, like the many individuals we meet for mere moments before drifting on in life upon our own changing currents, I didn't sense that there was anything that tied us together beyond that one bus ride among the hundreds I'm bound to take in my lifetime.

How wrong I often am.

Two-and-a-half hours of statistics later and the morning meeting had all but blown into the back corners of my memory. Class had ended a few minutes late and I knew I was going to miss the 11:52 bus that would take me back to King's Square, so of course I was panicking. That's probably why I completely forgot that there were two buses that stopped at the university, but only one that went uptown. So when a bus pulled up a few minutes later, I didn't think to check which one it was and boarded it without a second thought.

I'll pause here and emphasize the point that when I got on the bus, it was empty. Only one other woman got on when I did. I was sitting near the front of the bus and could see who got on and off as the ride progressed. No one boarded, to my knowledge, that I recognized.

As the bus drove along it's route, I still did not realize that anything was amiss because all the stops were the same. But when a man got on and inquired whether the bus was headed uptown and the driver said no that they were going west, I went into full-on panic mode. For me, full-on panic mode means that basically my brain shuts down and I have trouble with things like talking and breathing. So when I heard a voice behind me say, "Oh my gosh, you're not stopping uptown?" and turned around, I was not prepared to see Meghan. Her face mirrored my own.

Somehow I gathered myself together enough to say that I was in the same boat (er, bus). Everything else is a bit of a blur but somehow Meghan got us off the bus, over a wall, through a parking lot, and across a street to another bus stop where a bus eventually took us to King's Square. I got off but Meghan did not.

She called goodbye. I'm not sure if I'll ever see her again. I don't even know if I properly thanked her. What I do know though, is that if I hadn't met her this morning and if she hadn't somehow appeared on my bus later, today would have gone much worse. I realize that to many who read this, getting on the wrong bus is not a big deal. But for me, it's a nightmare and I'll forever be grateful to Meghan.

What I learned today is that we can never know the extent of how much someone may someday impact us - even if you've just met. In the same way, it is also impossible to tell how we may someday impact another. It's as easy as just looking up and smiling when you pass someone on the street. Or, like Meghan, take it a step further and ask for the time. It can make a world of difference. Heck, if enough people do it, I bet we can make a different world.