The blue-grey of the overcast sky provides an appropriate backdrop for the somber ceremony. Everywhere people are flocking to the town cenotaph, bundled up in winter coats to shield against the late-autumn chill. Children are laughing and bounding through leaves as their parents hurry after them, keeping track of dropped hats and mittens while trying to prevent dog leashes from becoming tangled in the crowd, not wanting to lose sight of their children in the crush of individuals. The morning air rings with laughter, shouting and barking. It is the 11th of November and the eleventh hour is quickly approaching.

As I’m standing still, trying to take it all in, my eyes fall upon an assembly of veterans gathering for the service. It’s a patch-work group; some are leaning on canes and walkers, others holding tightly to the arms of younger companions. Across the street from them, another group is forming. This time however, it is many rows of young men and women in uniform, and they are marching straight and tall. While to most both groups could not be more different, I am quick to note that each individual was similar in one way; they were all walking with their heads held high and determination in their gait. It was a pride of sorts for their country and as I looked on from my inconspicuous place in the crowd, I think I can feel it too.

The ceremony begins as it does every year, with speeches and readings and prayers. Everyone dutifully inclines their heads and remains still for the moment of silence, but whether this was out of respect or habit is difficult to discern. After the last wistful note of the bagpipe echoes over the river, the service proceeds with the laying of the wreaths.  By this time, restlessness in setting in and I can see people in front of me shifting their feet and looking around. Names are read aloud and as each wreath is placed around the centre monument, a cannon is fired.

At the first crack of the cannon, everyone jumps. I hear gasps, nervous laughter and hushed whispers, a child behind me utters an excited “Cool!”.  As the next name is read, I prepare myself for the next thundering boom, thinking to myself what hell it must have been for the soldiers to endure the sound everyday never mind running towards the bombardment. More names are called, more wreaths are laid and it is made evident that many around me do not share in my ponderings. In fact, some are downright disrespectful. People are chatting about the weather, the elections that had just ended in the States and the price of gas. It seems they care about everything except what is right in front of them.

Another cannon shatters the hushed murmurings and I look upward. A skein of Canada geese is flying overhead, their V formation never wavering despite the cannon’s resounding clap. I follow them with my eyes as they fly diligently on, freedom and stalwart dedication encompassed in their very presence. The ceremony begins to draw to a close and the crowd starts to disperse, hoping to make their escape before the heavy traffic develops.

My eyes turn once more to the gathering of veterans. They remain still, watching what is taking place in front of them, for all the world oblivious to the restlessness that surrounds them. To them, this day is something completely different. And though it’s beyond my ability to comprehend, I remain standing, with my feet apart and eyes ahead, trying to remember. 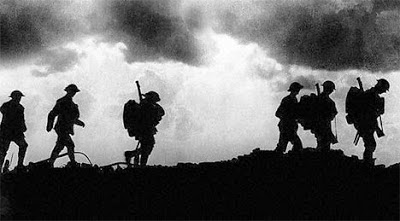